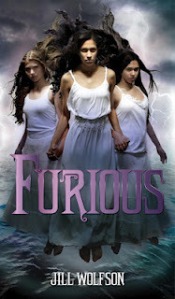 We were only three angry girls, to begin with. Alix, the hot-tempered surfer chick; Stephanie, the tree-hugging activist; and me, Meg, the quiet foster kid, the one who never quite fit in. We hardly knew each other, but each of us nurtured a burning anger: at the jerks in our class, at our disappointing parents, at the whole flawed, unjust world.

We were only three angry girls, simmering uselessly in our ocean-side California town, until one day a mysterious, beautiful classmate named Ambrosia taught us what else we could be: Powerful. Deadly. Furious.

Review: There’s been a huge explosion of mythological and fairy retelings within YA in the last few years, and it’s been a joy to comb my way through all of them. Some of them have had some of the most original ways of retelling these myths/legends/fairy tales, and “Furious” is no exception. I’ve always had a soft spot in my heart for the furies, and “Furious” gets it right, also reminding us that the more bent on revenge we are, the uglier we become (which so many YA myth books neglect to talk about when talking about the furies or other equal figures in other cultures), which is what I love the most about this book. If you’re looking for a great new YA mythological retelling, definitely check out “Furious”.

What’s also great is the fact that all three MCs get their own personal journey arcs, so that we can really track their development from the start of the book to the end, and their descent into revenge. While I feel like Stephanie was a little too stereotypical in her “tree-hugger” role, all three girls are very different from each other, though they relate to each other quite well. This, I think, is where Wolfson shines the most outside of the actual arc and plot retelling of Aeschylus’ “Oretesia” (the source material for this book) – character building. She’s great at really fleshing out all of her characters in her main cast, even outside of her MCs, and even the most minor character in that main cast feels very real. I loved that, and it made the book that much more enjoyable.

While I can’t say that I didn’t see all of those big reveals coming (some were kind of obvious), the ones that were a surprise were pretty awesome, and actually makes me want to read the source material to see how the construction of this retelling compares to the original. I loved how the plots were structured as if it were a Greek play, with separated sections showing the girls falling further into their need/want for revenge, and the consequences that soon arise from those needs. Also, the mention of the power of numbers/numerology was great, as we rarely see that in YA paranormal books, regardless if they’re retellings. I have a thing for numerology, and it was done correctly her, and that made me pretty happy. In history, all over the world, numbers played a huge part in whether someone would make a move, buy something, or make a big life change, and I’m glad that Wolfson really tells us that here in this book.

The foil to Ambrosia, Pallas, was a little too preachy for me, but with Raymond helping to balance her out and making her palatable, I was able to stand it. As well as the identity of Ambrosia’s killer in this life cycle, those foils and antagonist characters were a really nice touch. At first, I really wasn’t into Pallas as a foil because of that preachiness, but Raymond going into the mix really kind of mellowed her out, and made her a more solid and believable antagonist to our protagonists. The epic final battle at the end was incredibly satisfying, to the point where I feel like this book has a solid sense of closure to it, yet, if there should be another book in the works, still has plenty of stuff to work with. And that’s always a great thing, in case a standalone becomes a series book, and vice-versa.
Finally, there’s the issue of revenge becoming a gateway drug (of sorts) into worse things. Ambrosia clearly shows that in each beginning piece to each section of the book, but my favorite quote really just hit home how desperate and angry she is (and eventually how desperate Alix, Stephanie, and Meg become) about her murder:

“I am for a different ratio…revenge with daily compounding interest.” (ARC pg 172)

I absolutely loved that line, and it heralded the beginning of the end for Ambrosia and the rest of the girls so cleanly that I kind of just gave a golf clap (and not a sarcastic one, either). The story came together the most in these last few sections of the book after this quote. And that was really gratifying, because while the book was organized well and the transitions were good, the most action came at the end. And I love me my action scenes. (And did anyone else flash on the party/window scene from “The Craft” towards the end of this book? Just sayin’.)

Final verdict? This is definitely a really fun YA mythological retelling story, and definitely one to check out. “Furious” is out from Macmillan Children’s on April 16, 2013, so be sure to check it out then!

welcome to birth of a new witch

usagi invites you into her library as she explores books and creates her own worlds for you to explore.

what makes a universe?
a miracle?
a witch?

join her as she explores the world as we know it in order to find the answers.

Author of "The Hounds" in "Love Magick", an anthology edited by Francesca Lia Block. Available for your Nook/Kindle/other reading device now!

BUTTON (PLEASE UPLOAD TO YOUR OWN SERVER):

archives of a golden witch.

birth of a new witch by https://birthofanewwitch.wordpress.com is licensed under a Creative Commons Attribution-NonCommercial-NoDerivs 3.0 Unported License.
Permissions beyond the scope of this license may be available at flavors.me/goldenwitch.

100% full disclosure: any ARCs/galleys that the witch receives does not affect her opinion whatsoever toward aforesaid material that she will review.